While universities also target other disadvantaged social groups through institutional-level initiatives, the equity groups listed above continue to shape how inequities in access and participation are largely understood, funded, and addressed in the present day.

For example: performance data for each group are collected and reported annually across the student lifecycle; the vast majority of widening participation initiatives are directed at these groups; and research on equity in higher education primarily focuses on students who belong to these groups.

This framework has been crucial in bringing equitable access to the forefront of higher education policy and practice. Indeed, it has provided a means to longitudinally track access, participation, success, and retention rates for each group, thus illustrating changes over time. For instance, due to the longevity of the framework, we know that there is still much to do to improve the participation rates of most of these groups.

However, the enduring focus on these groups has meant that other equity categories have received comparably little attention. One of these is “First-in-Family” or “first-generation” status and our recent paper makes the case for this equity category being included in a revised national equity framework.

The link between university enrolment and parental education

While there are different ways to define First-in-Family status, we used parental education as the basis for our classification. This means that we characterise an individual as being first in family if they do not have a parent/carer with a university-level qualification.

When using this classification, it is interesting to note that levels of enrolment for First-in-Family students in Australian higher education do not appear to be particularly problematic at face value. That is, approximately 51 per cent of young people enrolled in Australian universities are first-generation students according to data from the OECD.

Upon closer inspection, however, higher education participation in Australia actually continues to be dominated by those with a family history of university. With only 27 per cent of the wider adult population holding a university qualification, the odds of being enrolled in higher education are almost two times greater for individuals with a parent who holds at least a bachelor-level degree.

Getting to university: The complexities of First-in-Family status

To warrant attention as a targeted equity category in policy, a group must not only be underrepresented in higher education, but they must also experience social, economic and/or educational disadvantage.

Our research focused on “prospective” First-in-Family students: young people enrolled in primary or secondary school who would be of the first generation in their families to attend university.

We drew on survey data from a larger four-year project examining the formation of educational and occupational aspirations among young Australians. This project ran from 2012–15 and involved 6,492 students (across Years 3 to 12) enrolled in 64 government schools in New South Wales (NSW).

In partnership with the NSW Department of Education, we used school enrolment records to examine the highest level of parental education for each student, comparing the prospective First-in-Family students in our dataset to their peers with university-educated parents.

First, we compared their socio-demographic profile. We found that prospective First-in-Family students are more likely to identify as Indigenous, come from lower SES circumstances, and live in regional/remote areas compared to their peers with university-educated parents.

However, some First-in-Family students don’t belong to any existing equity groups at all, which suggests that they would be overlooked in current equity interventions.

Second, we investigated the educational aspirations of our two groups of students.

Starkly, we found that across every stage of schooling covered in our research (Year 3 to Year 12), prospective First-in-Family students are less likely to aspire to university than their peers with university-educated parents.

Overall per cent of university aspirations by First-in-Family status 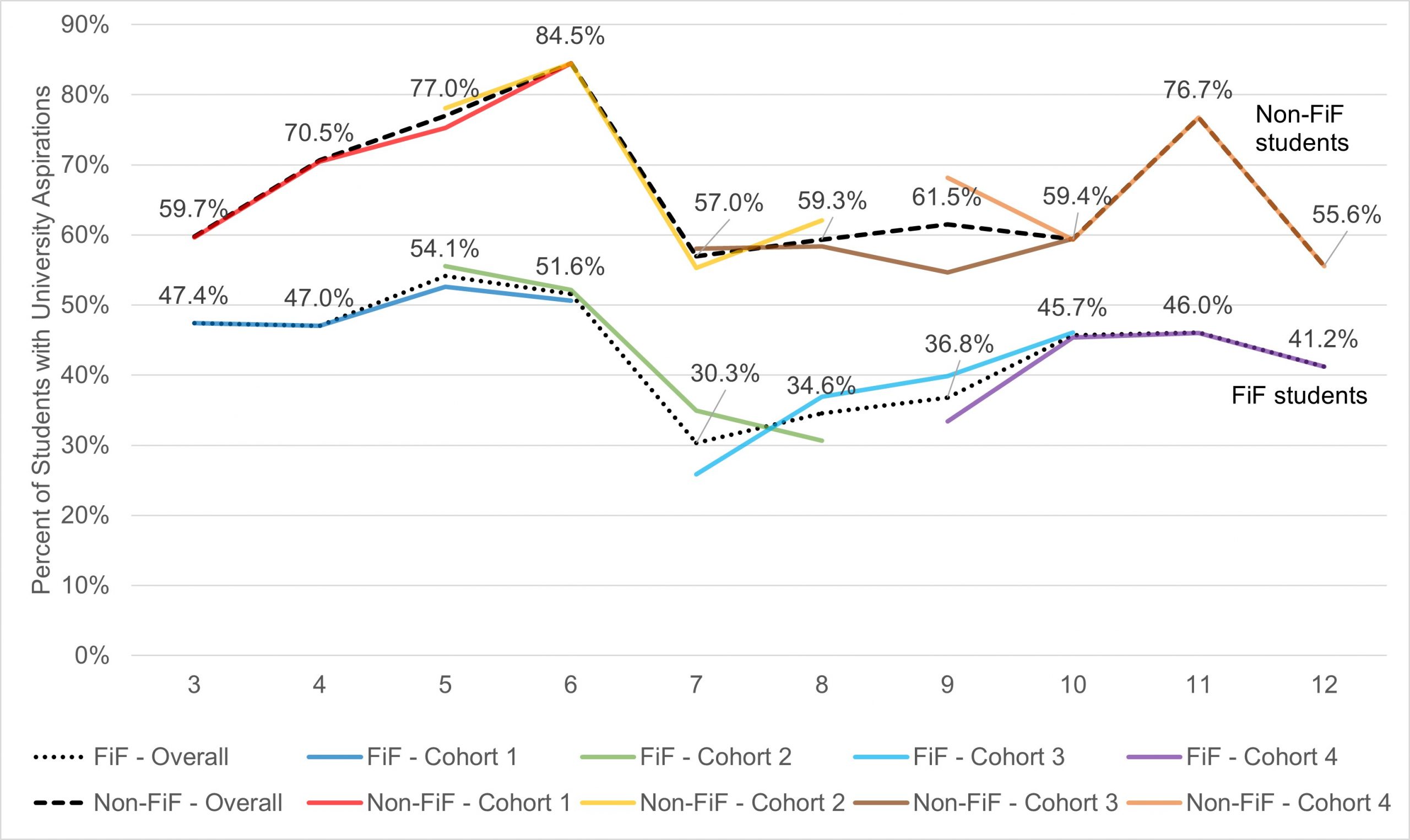 We also examined parental education as a predictor of university aspirations. When a host of other factors (such as sex, location, language background, Indigeneity, and academic achievement) were taken into account, young people with university-educated parents had just over 1.6 times the odds of aspiring to university than their prospective First-in-Family peers. This finding signals that there is a significant positive association between parental education and aspirations for higher education among young Australians which mirrors existing enrolment trends. It also shows that prospective First-in-Family students begin to foreclose on the idea of higher education from a very young age.

Where to next: Recognising First-in-Family status

Arguably, First-in-Family status represents everything that the higher education equity agenda espouses — opening the doors to those who are truly “newcomers”.

Our research provides strong evidence that First-in-Family status warrants inclusion as an official equity target group in future policy reform. It also shows that the initiatives some universities have already started to implement—such as ‘first gen’ events for incoming students and their families—are headed in the right direction in order to create a welcoming and inclusive space for all.

Interestingly, it was the first time point measured in our analysis—Year 3—when educational aspirations were most similar between prospective First-in-Family students and their peers with university-educated parents. Such a finding signals the importance of information about higher education being provided much earlier than is often the case — not in the form of traditional “careers classes”, but through informal conversations, role models, and exposure to campuses and facilities.

Recognising and supporting young people who are taking the momentous step in “being first”, we argue, is a critical component of addressing equity in contemporary higher education.