The ‘university place’: how and why place influences the engagement and retention of Aboriginal and Torres Strait Islander university students

This seed project aimed to enhance Aboriginal and Torres Strait Islander [1] university student engagement and retention. Specifically, this project attended to the notion of the ‘university place’ and provides information and two tools that universities can use to help optimise the persistence and educational outcomes of Indigenous Australians. This project has produced meaningful, useful and novel contributions that are relevant to the sector.

Contextually, this project is aligned with the Australian Governments’ priority area of improving access to and outcomes of higher education for Indigenous peoples as a part of the larger ‘closing the gap’ agenda. The recent Closing the Gap Prime Minister’s Report (Commonwealth of Australia 2017) indicated that efforts directed at understanding factors that optimise persistence at university is vital to improving Indigenous student completions and reaping the benefits that are central to increasing Indigenous Australians’ quality-of-life. Growing Indigenous university student enrolments in recent times, although still significantly below parity, have been stymied by high drop-out rates that are twice that of non-Indigenous students (Edwards & McMillan 2015). Yet, for those Indigenous Australians who complete university the benefits are considerable in that they typically find work faster and have a higher commencing salary than their non-Indigenous  counterparts (Turnbull 2017). Creating ‘university places’ that optimise the persistence of Indigenous Australians attends to this national agenda and was the focus of this seed project.

Much research has focused upon access to university for Indigenous students (e.g. Wilks & Wilson 2014), however little is known of the factors that support persistence. Several recurrent factors are identified as enablers of persistence for Indigenous students, such as whole-of-university efforts to enhance the university environment (see Behrendt et al. 2012). Indeed, one of the three strategies in the recently released Universities Australia Indigenous Strategy 2017-2020 focuses upon ‘improving the university environment for Aboriginal and Torres Strait Islander people’ (Universities Australia 2017, p. 11). What is missing from the current stock of knowledge is a nuanced understanding of these factors, the interplay between them, and the consequences of them for Indigenous Australians in today’s increasingly complex ‘university places’. 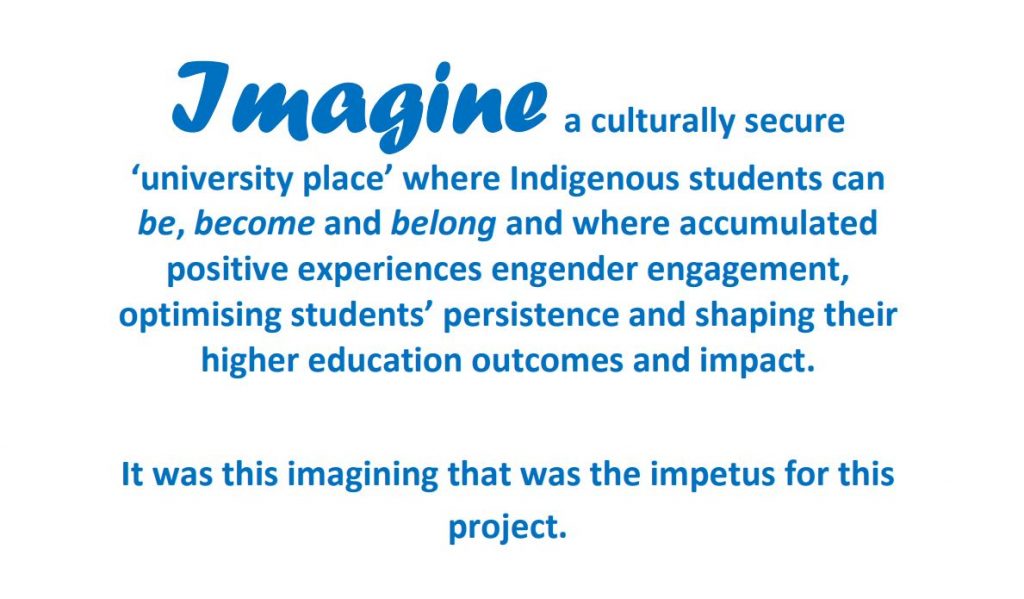 Central to this seed project is the notion of place. Place is broadly defined as ‘space + meaning’ (Harrison & Dourish 1996). People’s identity is intertwined with places and, as such, people and places are knitted together (Sack 1997).

Even so, the relationship between people’s identity and place is often overlooked (Malpas 1999). Place is defined as the experiential setting that consists of a specific location and the cognitive, emotional, behavioural and social activities that occur within (Relph 1976). People alter their identity in ways that help them navigate places (Baumeiser & Muraven 1996). Thus, the ‘university place’ comprises cognitive, emotional, behavioural and social activities in a locale that transpire across students’ university experience and with which their identity is intertwined.

People give some places special significance. Known as ‘third places’, these special places are beyond home and work, where people can be their authentic self, become who they want and feel a sense of belonging (Rosenbaum 2006, 2009). University campuses have third place potential and as being, becoming and belonging are pillars of peoples’ quality-of-life (Quality of Life Research Unit n.d.), the influence of the ‘university place’ is far-reaching.

Ultimately, imagine a culturally secure ‘university place’ where Indigenous students can be, become and belong and where accumulated positive experiences engender engagement, optimising students’ persistence and shaping their higher education outcomes and impact. It was this imagining that was the impetus for this project. Furthermore, the complexity of ‘university places’ and the inadequacies of past research presented the opportunity for this project to seed new thinking—one that includes students’ identities (as a student, as Indigenous, as an emerging professional) and an ecological worldview featuring continuous co-creation.

For this project, a case study approach comprised of two case universities and employed mixed methods that were organised into three stages. Stage 1 included the collation of relevant baseline data from the participating universities (e.g. Indigenous student enrolment numbers), and beginning-project presentations. Stage 2 comprised interviews and focus groups from which qualitative data was collected from: a) undergraduate and postgraduate Indigenous university students; b) academic staff; and c) relevant administrative, professional and technical (APT) staff at the participating universities. From this qualitative data, a framework was developed and was discussed at mid-project presentations and disseminated in the mid-project report. Finally, in Stage 3 quantitative data was collected via surveys of: a) undergraduate and postgraduate Indigenous students; and b) academic teaching staff at the participating universities. Stage 3 served to evolve the framework and develop the two project tools. End-project presentations, workshops, publications and this e-booklet served to widely disseminate the findings.

The findings of this seed project resulted in two tools — The iPlace New Thinking Prompts and The iPlace Ecology [1]. Both tools are scalable, portable and non-prescriptive. The two tools are designed to seed rethinking and new thinking about ‘university place’ praxis and they may be adapted either in part or holistically to assist with strategic imperatives or ‘closing the gap’ agendas of universities across the sector.

The central recommendation is that universities intentionally disrupt their status quo thinking and praxis regarding Indigenous students and the factors that enhance their persistence. ‘University places’ are a projection of the maturity of the Indigenous agenda of an institution and are an intersection of Indigenous peoples’ social identities (as a student, as Indigenous, as an emerging professional). The experiences within its bounds define Indigenous studenthood and shape its impacts. 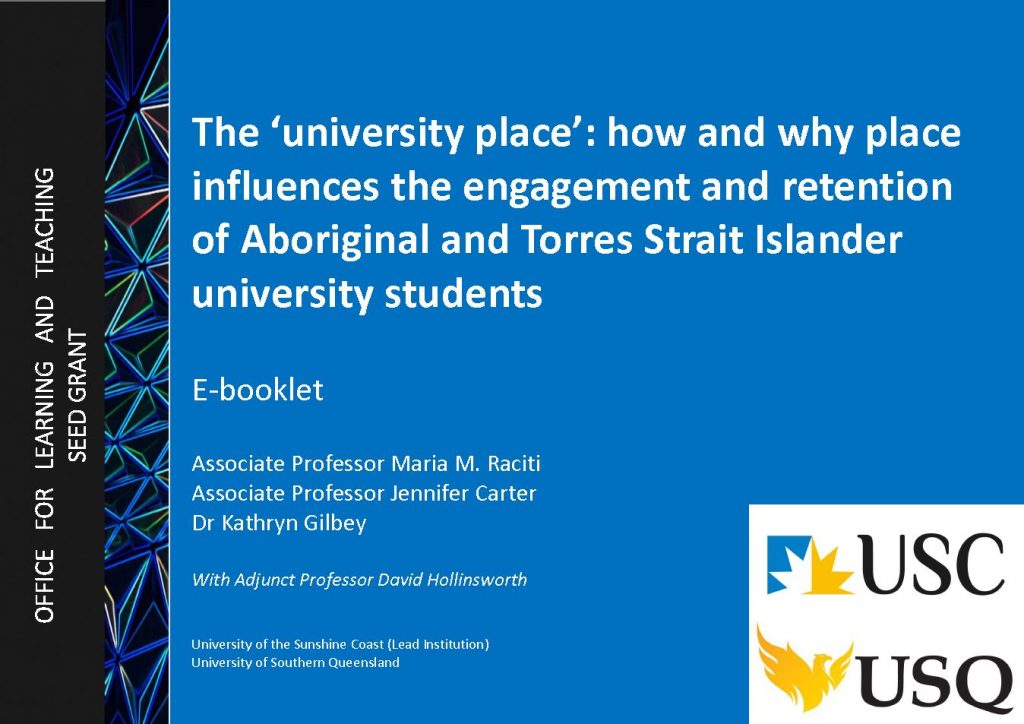 Final report: The ‘university place’: how and why place influences the engagement and retention of Aboriginal and Torres Strait Islander university students

[1] Henceforth the terms Indigenous and Aboriginal and/or Torres Strait Islander peoples will be used interchangeably. No disrespect is intended.

[2]  The term ‘iPlace’ was coined for this project and features in the title of the two project tools to convey that the ‘university place’ strengthens, shapes and creates the intersecting and multifaceted social identities of Indigenous students.