Written by Dr Tim Pitman for The Conversation

News media are widely reporting on new data released by the government showing that one-third of students starting university in 2009 had not finished their studies within six years.

This stat makes a good headline, but oversimplifies the reality, which is detrimental to improving higher education standards.

When you drill down into this data, the picture is very different for a number of universities. Completion rates range from 36.9% to 88%.

Those in rural and regional areas – in Queensland in particular – struggle the most to retain students, and accounted for seven of the ten lowest-completing institutions. Those based in the city have the highest rates of completion.

This is not necessarily a reflection on the quality of the educational experience that rural and regional universities provide, but reflects the demographics of the students they support. 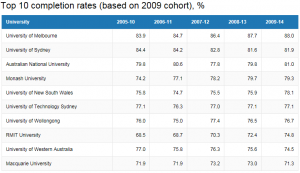 So why is it that some universities – mainly those in rural and regional areas – are still struggling to reduce drop-out rates?