Description
In January 2011 the University of South Australia established UniSA College. UniSA College is responsible for pre-degree and pathway programs and conducts a range of outreach activities for students who traditionally have not pursued university studies.

Academic programs provide more than just entry into university for students with low or no previous qualifications – they equip students with the knowledge and skills to succeed in their chosen degree. Programs include Foundation Studies and Diploma programs. The Diplomas are two-year programs providing a supportive university educational experience. In the first year of the program students build the skills and confidence they need to succeed at university. In the second year, students start the first year of their undergraduate degree, with additional support provided by College staff. Foundation Studies is a one-year program for people with no previous qualifications, preparing students for study at university. On completion of the program students apply for entry into a university degree.

Objectives
UniSA College’s role is to implement the University’s Participation Strategy, aimed at increasing the number of students from a low socio-economic background enrolled in the university. Its objectives are to raise awareness, increase access, and support achievement for people who have not previously accessed university studies.

HEPPP Funding
UniSA College was set up in part through funding obtained via the HEPPP. The outreach programs engaging secondary school students and community groups continue to be funded through the HEPPP.

Measurement
The success of UniSA College can be measured by the growth in participation in both outreach and pathway programs. Since 2011, 1,836 students have commenced an academic pathway program at UniSA College. Of those who successfully complete a pathway program, around 85 per cent have been offered a place in a degree program at the University of South Australia. Growth in student numbers over the three years has been significant. 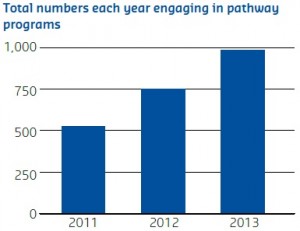 Participation in outreach activities has increased by over 600 per cent over the last three years.

The number of schools and their students involved since 2011:

The Future
Secondary school outreach programs which have focussed predominantly on the northern suburbs of metropolitan Adelaide will be expanded to include schools in the western suburbs from 2014. Enrolment in academic programs will continue to increase with a commitment to expand places to 1,200 students in 2014. Results from activities will continue to be disseminated through relevant outlets.

This case study is one of a series of 39 presented in our case study publication, Access and Participation in Higher Education: Outreach – Access – Support