How fair are Australian universities?

In a recent article, Dr Hannah Forsyth and I argued that it is more important for higher education to be fair – that is; providing equal opportunity to all – than it is to be free. Both would be ideal, but if one has to come at the expense of the other, we said we would prefer fairness.

Our comments generated much discussion and argument. A lot of it focussed on how to define fairness in higher education. In our article, we considered how representative universities were of the communities they serve. For example, are the percentages of Indigenous, disabled and rural and remote students the same in universities as they are across the country? In Australia, for all of these groups the answer, sadly, is no. Similarly, students from low socio-economic backgrounds make up a quarter of our population, but only 17 per cent of our students.

However fairness is also a relative concept. Are Australia’s universities more or less fair than those in other countries? Our article addressed this by comparing the proportion of 25-64 year-olds with a tertiary qualification across nations. In this regard, we believe Australia is equal sixth out of 22 countries.

An even more in-depth analysis was conducted by Alex Usher and Jon Medow in 2010, though they used the term ‘accessible’ instead of fair. Their ranking considered not only participation rates but also attainment rates and gender parity. They also created an ‘Educational Equity Index’ (EEI) to measure (at least in part) how similar a country’s student body is to the overall population, in terms of socio-demographic characteristics. We are indebted to Gavin Moodie, Adjunct Professor at RMIT University, for alerting us to the report.

The report can be found in full here, but in summary, this is how Usher and Medow rank Australia, internationally (click to enlarge): 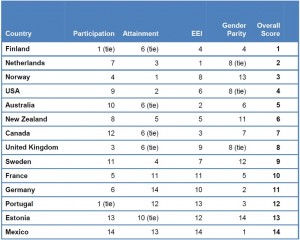 Of course, this is only one way of defining fairness and not everyone agrees with us that it is the right way. I recommend reading an article by Simon Marginson on the issue of equity in higher education, which you can find here.

Is an ‘inclusive’ university better than a ‘fair’ one? I’ll leave you to make up your own mind.